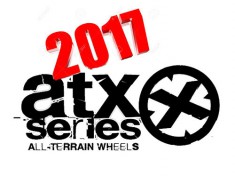 ATX Series Rims has done a great job with their new 2017 wheel models. They include the AX201 and AX202. We really like the two different finishes each model has to offer. Both the ATX Series AX201 and AX202 are available in Cast Iron Black as well as Bronze with Black Lip. Black wheels are one of the most popular demands you will see on the market today and the bronze color is a finish that is closely behind in popularity. The AX202 offers more of the traditional spoke type wheel which is one probably the most popular style which has a clean look but also says ‘custom’ or ‘aftermarket’. The AX201 is a unique design that isn’t over the top but at the same […] 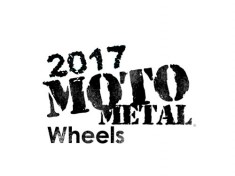 Some of the new 2017 models are: MO984 Shift, MO983 Dagger, MO982 Amp, MO981 Spade, MO979 Buckshot and last but not least the MO978 Razor rims. Last year, Moto Metal only released one new model for their line but this year they have came through and really did a fantastic job with all the six new wheel models available for 2017. One of the most unique but also one of our most favorite of the new models is the MO979 Buckshot. It is outlined into the shape of a shotgun barrel for the spokes and around the lip is the double barrel. The creativity behind the creation of that wheel is awesome. Moto Metal understands that most people don’t want to have such unique designs so that […] 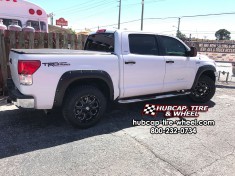 Take a look at our customer’s 2012 Toyota Tundra SR5 with 20″ XD Series XD825 Buck 25 Rims. Let’s go into the full spec details including which tires he chose. Our customer’s white 2 wheel drive Toyota Tundra came out great with the stylish KMC XD Series XD825 Buck 25 wheels. He went with 20″ black and milled wheels which was replacing his stock SR5 18″ aluminum wheels. We also put on a 2.5″ front level kit which took all the rub possibilities out of the equation so he didn’t have to do any type of fender modifications. He wanted all-terrain tires and when this topic comes up we always recommend the Nitto Terra Grappler G2 tires. We have them on our vehicles here at […]